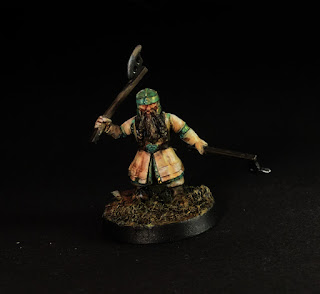 His knees shook, and he was wroth with himself. "Here is a thing unheard of!" he said. "An Elf will go underground and a Dwarf dare not!" With that he plunged in.

Painted with glazes / thin paints, then with washes. Basecoat for the tunic was off-white. Washes were mostly soft tone (but also, at least in parts, VMC beige brown). For the verdigris, over green + white + turquoise basecoat, first was was AP soft tone (over the whole mini, for weathering), the second was AP green tone (only in areas with less light, for shading). Right after came a gold drybrush.
o 12.1.19