Longevity feels exciting at first, but you get used to it after a millenium or two, tops.
o 21.4.22 1 comment:

Closing the gap, ever 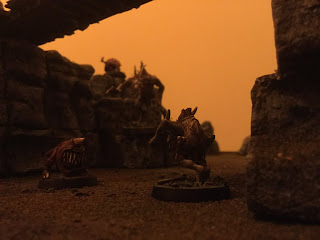 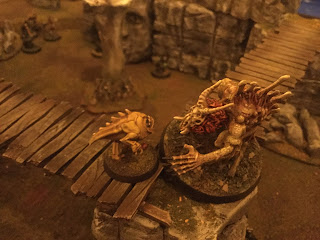 Strange physiques. Picking a side is an exercise in creativity, nothing more. 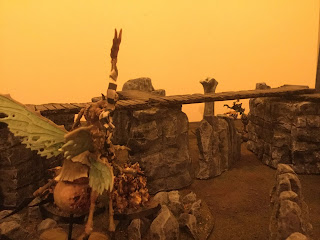 Perched high upon my steed, I survey another battlefield. 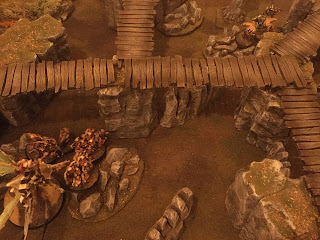 Will we get to the end, ever? Or will we succumb to our ailments? 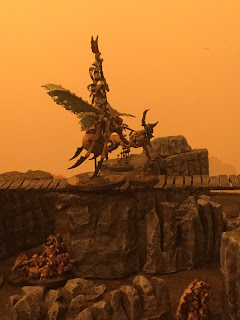 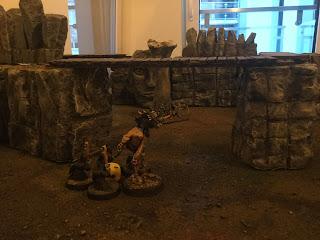 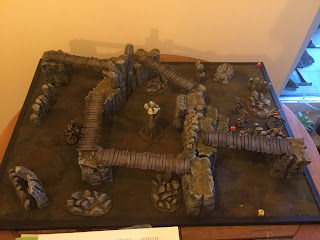 Email ThisBlogThis!Share to TwitterShare to FacebookShare to Pinterest
Etykiety: land 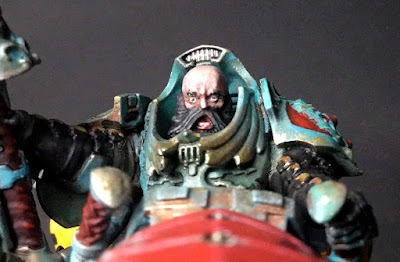 We revere humanity. Serenity is human; enlightenment is human; and fury, as well, is equally human.

Email ThisBlogThis!Share to TwitterShare to FacebookShare to Pinterest
Etykiety: the guard of Monaster

There are statues on the shore 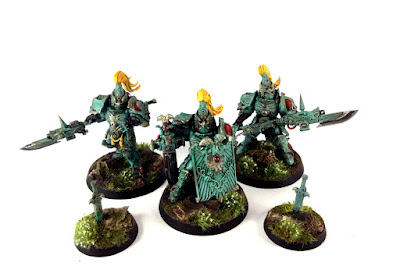 There are statues on the shore and they have been there longer than we can remember. But every year there is a morning when you realize the statue is slightly different than yesterday: different reliefs on the sculpted armour, a subtle difference in pose, perhaps even a slight change in size. There has been a change of the guard.
o 9.12.19 3 comments:

Email ThisBlogThis!Share to TwitterShare to FacebookShare to Pinterest
Etykiety: the guard of Monaster 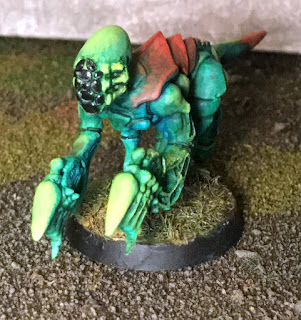 Behold the primogen now, she is just like you.
Crawling through the living ship,
feeling the heartbeat of the things to come,
once the slumber is over. 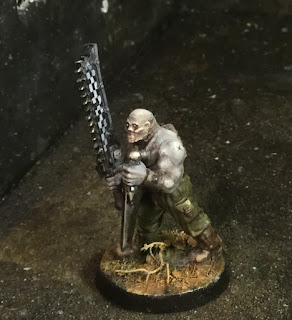 We knew they were no ordinary soldiers, these allies of us. Their military prowess was well known to be superhuman. In retrospect, it was a folly to expect them to be just as human as you and I. 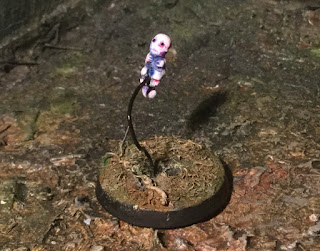 This does not exist. It never did.

I've had some problems with my Army Painter Strong Tone wash. It gave my miniature a glossy finish and left beige frosting in the recesses. I asked around and was advised to shake my wash bottle well before washing. It was good advice and it worked – to a point; there was still some gloss and frosting left. So I started thinking of switching to another brand. 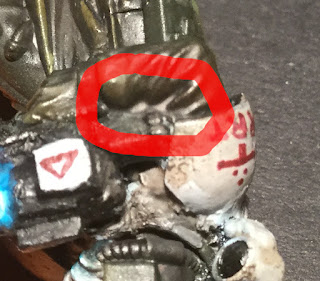 But first, I wanted to check how different brands work out. I took four miniatures for my RRT infantry unit. One was washed with Citadel Agrax Earthshade (A), one with Army Painter Strong Tone (ST; I mean the acrylic wash in a dropper bottle, not the Quickshade dip), one with thinned down paints (P, the paints used were VMC beige brown mixed with VGC black), and for comparison I left one not washed (NW).

I sprayed the minis black, then white. I painted the uniforms in two very thin coats of my olive drab mix. The armour was done with a number of thin coats (maybe they count as glazes) using mixes of white, black, and turquoise.

For the wash, I shook each bottle for at least 30 seconds, and I followed Duncan's tutorial as well as I could – applying the wash with a larger brush, quite generously, and moving the paint around to prevent pooling.

I took photos in daylight and used no photo correction software. The colours look more or less like in real life, but sadly, it's also pretty hard to notice minute detail. This may mean the photo quality is really bad, that the imperfections that bothered me aren't that noticeable and important, or both.

Neither wash made the mini more or less glossy – all models ended up with a satin finish. 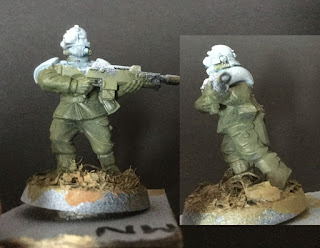 Above: for the mini with no wash, from up close, the uniform looks somewhat boring and artificial, like green army men. Through the paint, you can see the speckled undercoat and it feels a quite jarring. Sometimes in the deep recesses you can see a brighter line (e.g. below the left leg pocket), but it's almost invisible, especially in the photos. This seems to be a natural effect of light.

Above: after AP strong tone wash, the armour looks a bit dirty and worn, and the shading is pretty subtle. For the uniform, most recesses are darker and more pronounced, but sometimes, like above the fold on the left leg, it's quite the opposite, with lighter brown frosting where a shadow should be. Elsewhere the wash simply didn't get inside the recess – like on the side of the canteen. I don't know what happened to the spaces between the left hand's fingers, but they are brighter, too.

Above: for Agrax, there's little difference for the shading of armour. Most visible are the shaded recesses on the uniform – they're significantly darker when compared to the AP strong tone paintjob. Still, some recesses look brighter than their surroundings (one of the folds on the left leg, spaces between fingers) – but this effect is less pronounced than for AP wash. 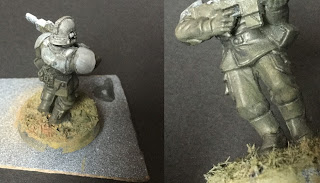 Above: After the paint wash, armour looks the most rough, but also the most painterly and, arguably, most interesting. It resembles old stone. The uniform looks darker too, but not that attractive. It's as if AP and Citadel washes made the miniature look less plastic and more real, while the paint wash didn't. Most dark recesses are really dark, but you get also random effects where you can see the underlying paint, and it's more pronounced than in ready-made washes – especially on the back of the head.

What wash would I recommend? Neither is perfect, at least not after a single layer. Home-made paint wash makes for a pretty good stone texture, but doesn't feel like a good choice if the army is supposed to look striking on the tabletop; later on, even after edge highlights, the armour looked grey, not white. Then,at arm's length, there's little difference between AP strong tone and Agrax, but from up close, the latter looks more interesting and reliable, with no visible frosting.

So, for painting military uniforms and white armour, the winner is Citadel Agrax Earthshade. Still, it's probably worth to experiment with different (and slower, alas) techniques to get more reliable results with stronger contrasts – maybe with oil washes (not that I'm a fan of oils), maybe with targeted washes, maybe with good old layering or feathering.

And you – do you have your favourite wash recipes?

Email ThisBlogThis!Share to TwitterShare to FacebookShare to Pinterest
Etykiety: recipe 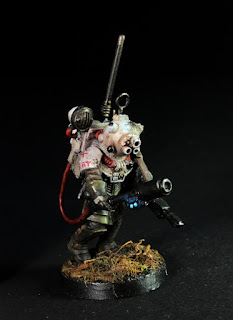 His panoptic helmet lets him see wavelengths invisible to humans, and grants him eyes in the back of his head, literally. After the improvements, the percentage of wearers afflicted with God complex fell considerably, but the helmet is still not deemed safe for general use.

Arsenin carries a detector, which is little more than a divining rod. That will suffice. 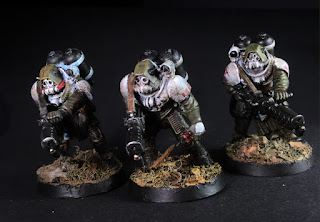 On this minimal planet, there were few insects. Only us, crawling like beetles from distant worlds.